Alwin Joshy Joseph a talented Games Development student of SAE Dubai. After finishing his Grade 12 studies, he was planning to study engineering in India, but then decided it would be better for him to pursue his creative side. Alwin learnt web design and then moved into learning WebGL where he was introduced to the Unity3D engine. This is how his interest in games development started and so he decided to spend some time learning it. Alwin heard about SAE and the Games Development degree and felt it was the perfect opportunity for him to learn about his passion. Alwin is currently studying and working at SAE. 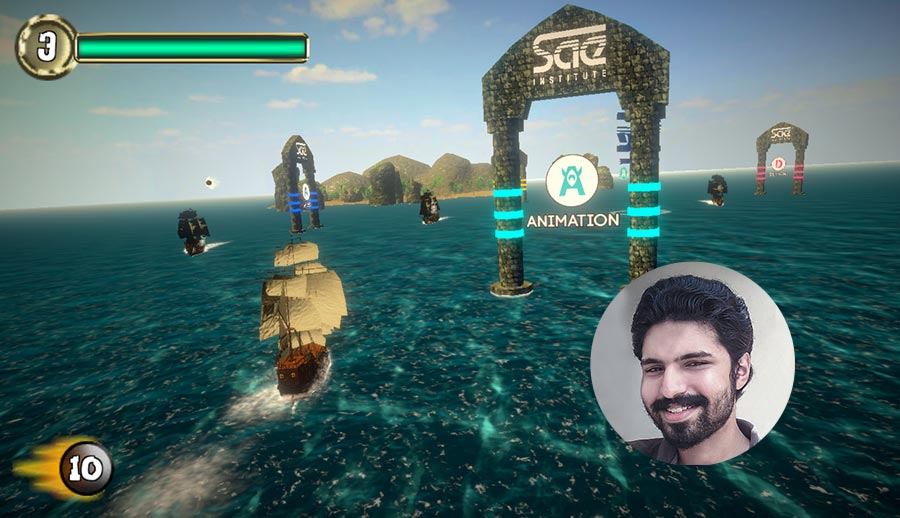 What inspired you to choose the career of game developer?

For me, this field is the future. The world is becoming a smarter place; there are smart phones, smart cars, smart watches and so much more. Games development is the stepping stone towards AI, which is one of the most promising technologies of the future.

Which other software and platforms did you use as a designer and game developer?

To design, structure and deploy a game that is fully functional, and compatible with multiple platforms, I prefer Unity3D. It’s a free to use engine. I use Blender when it comes to 3D modelling and Adobe Photoshop for texturing.

What projects are you working on at the moment? Your favorite game produced by yourself?

Right now I am working on a technical project mostly focusing on achieving real-time ray tracing, which to be honest is a very difficult task considering the limitations of most platforms and being a beginner to graphics programming. I would say the favorite game, which I have produced since I have started game development is Seven Battles, the main reason is that I learned and applied a bit of cinematography for visual enhancement on this project.

How do you meet tight deadlines? Tell about a time you completed great work under pressure?

I schedule work in order of priority and I try to get done with the most critical and immediate tasks first, so they are off my list. This gives me more time to solve other issues. The other way I manage my time is by using my spare time to learn new things, which saves me a lot of learning time later. I can say that there hasn’t been a situation where I have failed to manage time yet.

Can you tell us more about your game “Seven Battles”?

Personally, I am a fan of the ocean because of the beauty, mystery and the freedom portrayed by it. And also I have a keen interest in world history and obviously stories that involve maps, treasures and pirates. I made this game so that people can love the ocean just the way I do.

During the Golden Age of piracy, which lasted roughly from 1700 to 1725, hundreds of pirate ships plagued the waters of the world. Your mission is to find their treasure and defend yourself using your canons.

Can you explain about the difference of games genres in the market?

There are a lots of genres and sub-genres out there in this field. The most common ones are the action, adventure, MMO, RPG, shooter, puzzle, casual etc. but I still feel the greatest competition in the current market is between single player and multiplayer games.

Which Game Developers do you admire the most and how did they influence your work?

I admire and am fascinated by the works of the Japanese game designer Hideo Kojima, the man behind titles like Metal Gear Solid and Silent Hill.

What qualities and skills should a good Game Developer acquire?

A good game designer must try his or her best to learn a lot about the human mind, perception, and about the modes and channels of communication or expression, which could be visual, audio, etc. A game designer should be like a film director and must work towards achieving something called the artistic freedom or enlightenment.

What advice would you give to students aspiring to become successful in Creative Media?

As the name suggests, the industry is all about creativity. Here the only limit one may face is the limit of his or her imagination and the pressure to not run out of ideas. To avoid this, one must spend time reading, listening or watching content of their interest to keep up with the current pace of the industry.

Now you can try and test Alwin's "Seven Battles". Any feedback would be greatly appreciated. You can find his email below.